For many people, the first image that comes to mind when they hear the word “drone” is likely a military drone like the Predator. But the quadcopter is quickly becoming the poster-child of drone technology because it has been an effective and relatively simple design.

Like many first generation models, capabilities are limited to the drivetrain unless the customer is willing to shell out serious money for generally expensive aftermarket drivetrain upgrades, customized editions, or third-party components (e.g. cameras, stabilizing mounts, adapters, core hardware, etc.).

The stability sole, quad-copter design is riddled with flaws inherent to the design.

The Krossblade SkyProwler Multi-Mission VTOL Transformer Drone, however, stands to take quadcopters beyond their current limitations.

The SkyProwler is developed by Krossblade Aerospace Systems LLC (KAS), which was founded with the goal of “bringing rapid aerial transport to more people.” The company is “currently working on the concept and proof of concept of a vertical takeoff transformer airplane that seats 5 people as well as a smaller drone version.”

Yes, KAS is making the flying-car a reality.

Their vertical take off and landing (VTOL) drone SkyProwler has been featured as a premier project on the Kickstarter site and, to date, is fully funded. KAS and its products have has been featured in Popular Mechanics as well as on CNN.

Understanding the market demand for faster yet stable drone platforms, the innovators at KAS looked to their concept design for a multi-role civilian vehicle, the SkyCruiser. The SkyCruiser is a “concept 5-seat hybrid VTOL transformer airplane with road-drive ability.” The resemblance to the full-size SkyCruiser is apparent in the final design of the SkyProwler.

The SkyProwler is the cutting edge of drone design. The fixed pitch of the quadcopter makes it simpler to control than a helicopter, KAS explains in a article. However, this single advantage is also its primary drawback since the traditionally fixed-rotor design does not naturally provide forward propulsion.

For a quadcopter to move laterally, power must be varied between the 4 rotors to tilt the craft in the desired direction. When chase footage is desired, this method of flight is both inherently slow and inefficient. You can add a more powerful engine or replace the body with this or that composite, but you only reach a top speed that a scaled airfoil design could match with much less energy. 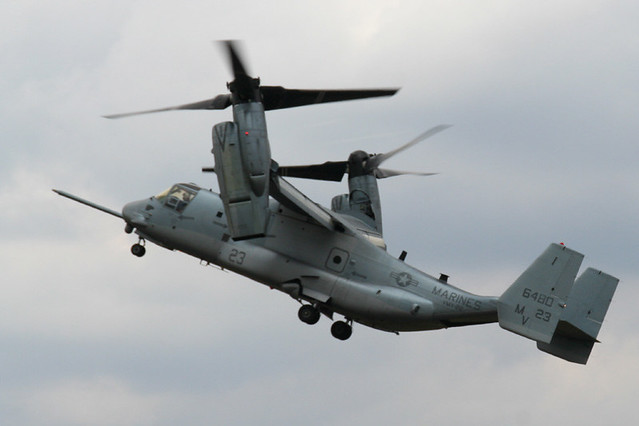 The Boeing V-22 Osprey was designed with this flight characteristic in mind. Pilots vary their rotors’ pitch to optimize performance, whether carrying heavy cargo or cruising at high altitude.

Recognizing the inhibitions of traditional hover-oriented flight in an article, KAS designers created their drone in light of a conventional aircraft. First, KAS designed the center fuselage with aerodynamics in mind. Second, they added two horizontal thrusters for lateral thrust added to reduce/eliminate the need for tilting for movement’s sake. Third, they developed mechanisms to enable in-flight transitions from hover to conventional flight.

The SkyProwler features a modular airframe. The wing and tail assemblies are removable/swappable for customizable alternates. Notably, hover-based flight is not only possible with the SkyProwler but it is more efficient than when done with a quadcopter platform. First, the horizontal thrusters featured in the KAS design provide more effective thrust than full-aircraft-pitch derived thrust. Second, the SkyProwler drag profile is sleeker than that of a quadcopter. So, the SkyProwler beats a quadcopter at its own game.

KAS is changing the market for replacement parts. In an article by 3DPrint.com, KAS reports it will enable users to 3D print their own spares by supplying the necessary “stl” files (most likely for a nominal fee).

It’s a transformer, it’s quick, and it’s easy to fix.  So what can the SkyProwler do, exactly? First, it can take sharp and stable footage. The Pro Edition “shoots 4K (video) at 30 fps”; the ProAm  Edition “shoots quality video at 1080 resolution  and 30 frames per second.” KAS integrated their camera system into the  SkyProwler frame. To eliminate the drag generated by traditional external configurations, the company substituted the “Eye cam” in for the drone’s nose cone. To provide clear footage, the company seated their camera within a “2D (degrees of freedom) brushless gimbal and anti-vibration mount.”  To stay market flexible, KAS created nose adapters for third party camera systems such as GoPro.

Second, it can stay airborne for a long time. In Blade (plane) configuration, the SkyProwler can cruise at 65 mph for over 30 minutes – this equates to a range of over 40 miles.

Don’t feel like holding a controller for that long?  Third, the SkyProwler can follow the operator by tracking the signal of a wearable GPS radio as well.

Fourth, and further down the hands-free road, the aircraft responds to voice commands such as “land” or “take-off.”

Krossblade Aerospace Systems is developing a revolutionary drone platform that can stay in the air for half an hour, hover and then accelerate to highway speed, literally follow the user, and take voice commands. In doing so, KAS is fundamentally redefining the humble “quadcopter.”

See the SkyProwler for yourself, here.