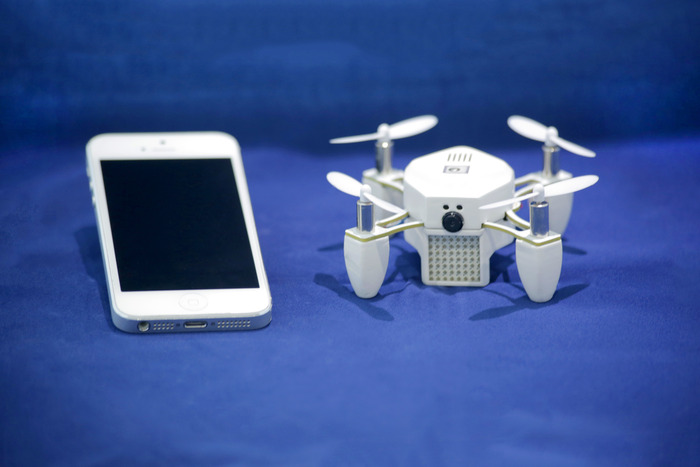 This summer, a new type of drone is coming to the market: the ZANO, produced by Torquing Group. ZANO, unlike other personal drones on the market currently, is meant to be spectacularly small and lightweight, for quick and easy portability. At 2.5 inches by 2.5 inches and weighing barely two ounces, ZANO is easily the smallest drone on the market, selling for approximately $260. Yet, what makes ZANO truly unique is not how small it is, but rather how it’s controlled: via smartphone.

The ZANO is equipped with a Wi-Fi chip, allowing the user to connect to it with their smartphone, whether it’s running Android or iOS. The ZANO is then controlled by a native application, and works almost identically to flight simulators already on Google Play and the App Store: by tilting your device in the direction you want your ZANO to go.

To further help with navigation, the ZANO has also been outfitted with a camera, which will broadcast what it’s seeing at all times to your smartphone. Pictures can also be taken from within the application. By default, the ZANO will be ‘tethered’ to the user’s smartphone, meaning that it knows its location relative to the device, and will maintain that location. If the smartphone moves, so will the ZANO, allowing for the user to walk with the ZANO following closely behind.

Torquing Group began as an Australian startup in the nineties, but relocated to the UK in 2007, and formed their UAS division in 2010. Since then, they have been working almost exclusively on intelligent Nano UAS technologies, the ZANO being the result of five years of work.

In October of 2013, it was first brought up that perhaps this ultra-small, ultra-portable UAS technology should be made available for public consumption, which resulted in development of the commercial version of the ZANO UAS. Roughly four months later, the first prototype was completed. Another three months later and the team felt that they were happy with the design of the craft and how it flew, and spent the following three months making it aesthetically pleasing. By November, everything about ZANO was ready to go: its design was complete, the aesthetic settled on, supply chain and packaging ready for manufacture. The only thing that was left was to actually produce the ZANO.

Torquing Group sought funding for the ZANO on Kickstarter, and reached its goal of £125,000 on January 8, 2015. By the end of February 2015, the ZANO had been funded at £2,335,119. This has contributed to the ZANO receiving much more development than originally intended. At first, the ZANO was to be sold in one color, and an application was to be developed for it on Android and iOS. With the huge amount of funding that ZANO received from Kickstarter, the project has been expanded immensely to include five colors of drones with matching portable carry cases, including one glow in the dark color, a portable charging stick, and the ability to “swarm,” that is, connect multiple ZANOs to the same smartphone device and have them act in unison.

In March 2015, Torquing Group plans to finish the applications that will control the ZANO and put them through rigorous testing to ensure that it works as it should. The apps will then be submitted to their respective app stores for approval and made available in May for download in preparation for June’s release in the United Kingdom of the ZANO. Torquing Group has not yet announced a planned United States release date, however, it is likely it can be shipped from the United Kingdom to the United States.

Torquing Group decided to put the ZANO on Kickstarter because, in order to keep production prices down, they needed to increase their manufacturing numbers. By putting the ZANO on Kickstarter, they not only increased awareness of their product, but also allowed them to designate their first round of manufacture as a test, to iron out any possible issues throughout the supply chain as the ZANO gets into the hands of Kickstarter supporters. The money pledged by supporters also has allowed Torquing Group to hire additional experts to help develop the ZANO and upcoming projects by the Torquing Group further.

The ZANO is clearly an innovative piece of drone technology for multiple reasons. First and foremost, there has never been a drone as small as the ZANO, let alone one dedicated entirely to personal photography and videography. Controlling the ZANO on a smart device as if it were a flying simulator is a novel idea that may represent a shift in how to fly drones, by developing more natural and intuitive control methods. The huge audience that the ZANO has already amassed and the money it has acquired demonstrate that the public likes these innovations, and are willing to pay to see it become reality. With luck, perhaps these innovations will follow in other drones in years to come.